Difference between revisions of "Arinj Village" 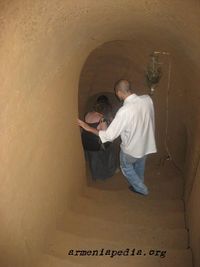 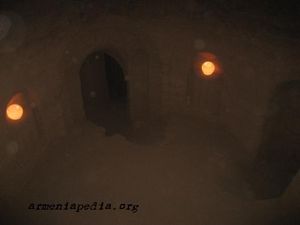 Chamber of cave from above

ROCK AND SOUL: MAN WITH A MISSION CREATES AN UNDERGROUND MONUMENT

If you wish to escape from the noisy routine of life, you need only visit the village of Arinj, not far from Yerevan, and ask for Lyova Arakelyan's house.

Every single man here old or young will willingly accompany you to this handmade unique cave of the 21st Century that has attracted already the attentions of 40,000 visitors, not only from Armenia, but also from the US, Poland, Germany, Iran, Japan, Israel and many other countries.

Wonders lie on the other side of the gates to Arakelyan's simple and nondescript house. The gentle 64-year-old cave- maker with smiling eyes opens the heavy iron handled door of his `temple' and leads you into an underground world of his own creation.

Stairs carved in the grey basalt lead down from our surface life to a depth of 21 meters (equal to a 7-story building) and an underground world. After 80 stairs you find yourself in a round hall with decorated alcoves, then on to another room with columns, before entering a hall that calls to mind the interior of a church.

Further and further into the cave the labyrinth of stairs carries you, into six halls of this rocky engraved museum, each with its own unique carvings.

Arakelyan, a construction worker by trade, never intended to dig under his own house to create a cave church. He had been building homes for 25 years, when one day 20 years ago while in Russia, he says a phantom came to him and said: `You have an important job to do, you will live 96 years and images will appear in your eyes during those years that you need to repeat exactly.'

Then, in 1985, Arakelyan went down to the basement of his house to dig a store for potatoes, as his wife Tosya Gharibyan had asked. It was a request that radically changed their lives.