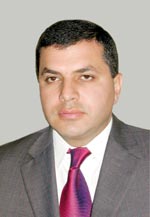 Aramayis Grigoryan was born on October 6, 1965 in the village of Avshar in the Ararat region.

Mr. Grigoryan received his degree in engineering and technology from St. Petersburg Institute of Light Industry in 1988, in the Russian Federation.

From 1985-1987 he served in the Soviet Army. He then spent two years working as a quality engineer in Ararat Knitwear Factory. From 1988-1990 he headed the organi­zational division of the Vedi Council of Ararat Regional Committee. From 1999-2002 he worked first as a deputy director and then from 2002-2003 as a general director of Avshar Wine Factory.

On May 25, 2003 he was elected to the NA from electoral district # 25 and he cur­rently serves on the NA Standing Committee on Financial-Credit, Budgetary and Economic Affairs. He is not a member of any of the NA factions or deputy groups and he has no political party affiliation.

Mr. Grigoryan is married and has three children.