From armeniapedia.org
(Redirected from Amberd)
Jump to: navigation, search 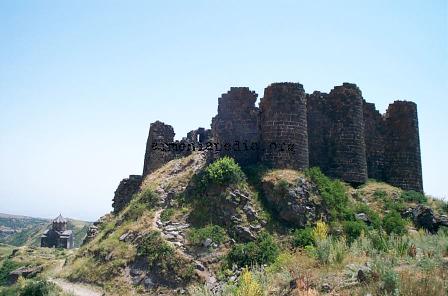 Amberd is a fortress complex with a church built on the slopes of Mt. Aragats at 2,300 meters above sea level in the XI-XIII centuries. The road leading up to it on Mt. Aragats is virtually uninhabited and has gently sloping hills with the occasional shepherd and beekeeper. many wildflowers and great views. Amberd is a tall fortress built on a rise in between two streams. The church, built in 1026 by the architect Vagram Pakhlavuni, is slightly down the hill from the fortress, nearer to where the two streams join.

Bring a lunch along because it is a perfect spot to relax, go back in time, and catch your breath. As well there were no places to stop for food anywhere near Amberd.

Amberd stands on a rocky eminence, again one of the impregnable fortresses of medieval Armenia. The princely castle of Amberd was built in the 11th to 13th centuries. A two-storeyed structure fitted with a majestic staircase, the castle is protected by walls with inclined towers. The baths were constructed outside the palace in the 13th century. The church was built in 1026 by Prince Vahram Pahlavuni. It belongs to the cupola'd hall type. The exterior architecture is simple and expressive, crowned by an umbrella shaped cupola. 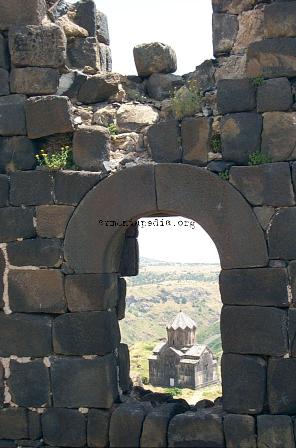