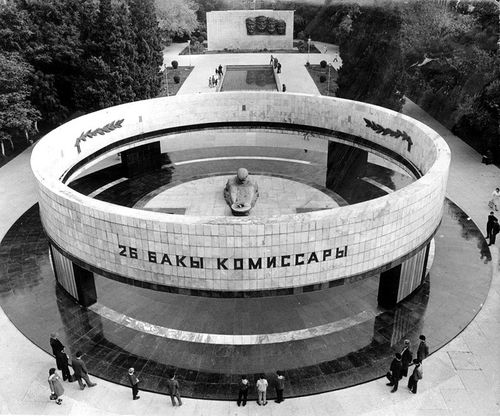 The now destroyed Baku mausoleum for the commissars

The 26 Baku Commissars were Bolshevik and Left Socialist Revolutionary (SR) members of the Baku Soviet Commune. The commune was established in the city of Baku, which was then the capital of the briefly independent Azerbaijan Democratic Republic, and is now the capital of the Republic of Azerbaijan. The commune, led by Stepan Shahumyan, existed until 26 July 1918 when the Bolsheviks were forced out of power by a coalition of Dashnaks, Right SRs, and Mensheviks.

After their overthrow, the Baku commissars attempted to leave Baku but were captured by the Centrocaspian Dictatorship and imprisoned. On 14 September 1918, during the fall of Baku to Ottoman forces, Red Army soldiers broke into their prison and freed the commissars; they then boarded a ship to Krasnovodsk, where they were promptly arrested by local authorities and, on the night of 20 September 1918, executed by a firing squad between the stations of Pereval and Akhcha-Kuyma on the Transcaspian Railway.