Tavush Battles / How did it start?

Here is another explanation by FIP with a more detailed map of where Qaradash is, and where Armenian and Azeri outposts are: https://fip.am/12309

These maps show the USSR-era borders vs de-facto post-independence borders: 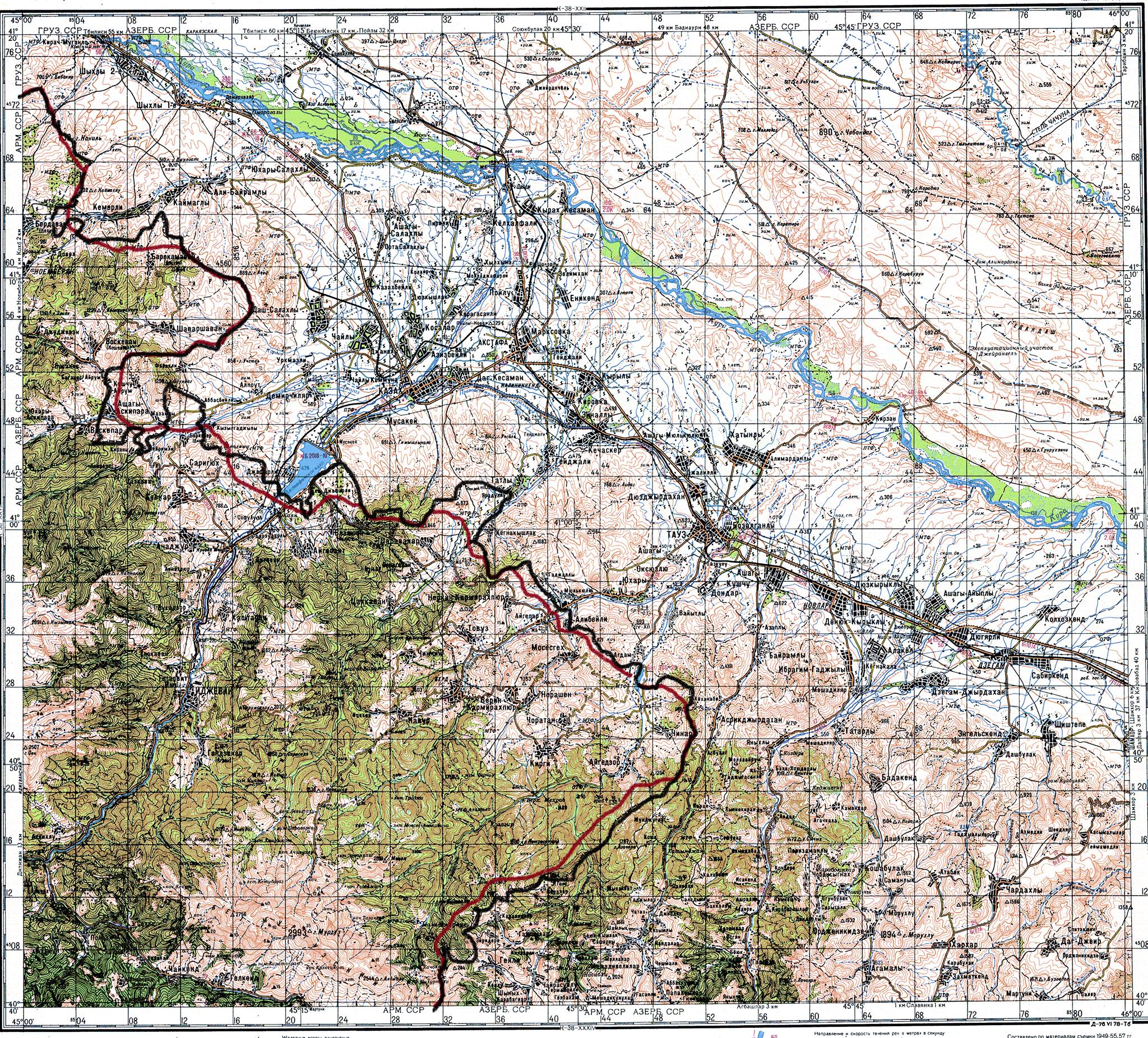 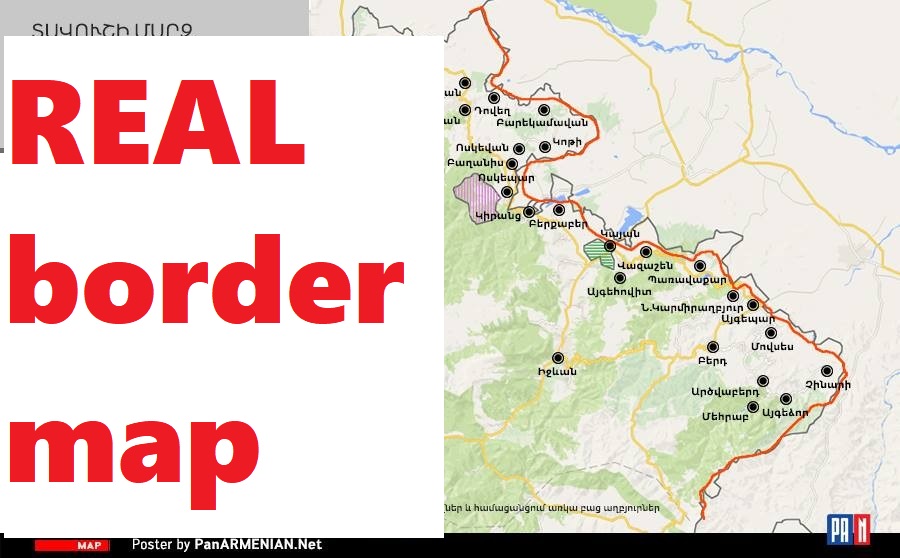 Armenian video of the UAZ incident (including voice). https://youtu.be/ECNIpfzrL8U

Image shows how close Armenians got to the legal border, by judging from the video Armenia recorded during the extraction of dead Azeri soldiers from the battlefield: https://twitter.com/NKobserver/status/1283782205848854531/photo/1

In that above image, NKObserver outlet says the yellow square shows the Azeri outpost, but later the Armenian army confirmed that it belongs to Armenia, and that's what "Anvakh" is.

Armenian army says the location of Armenia's [presumably new] Anvakh outpost is 40.904468, 45.527870. The new location allows Armenians to monitor the road that leads to the Azeri outpost on Mt. Qaradsh, hence Aliyev's temper tantrums. The map:

An Azeri outpost on Qaradash that is cut off from the road: 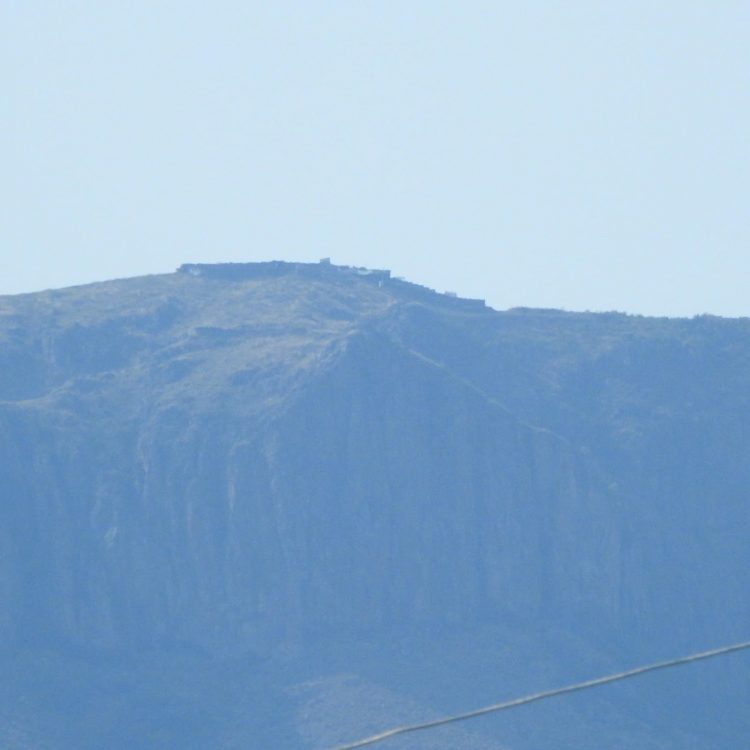 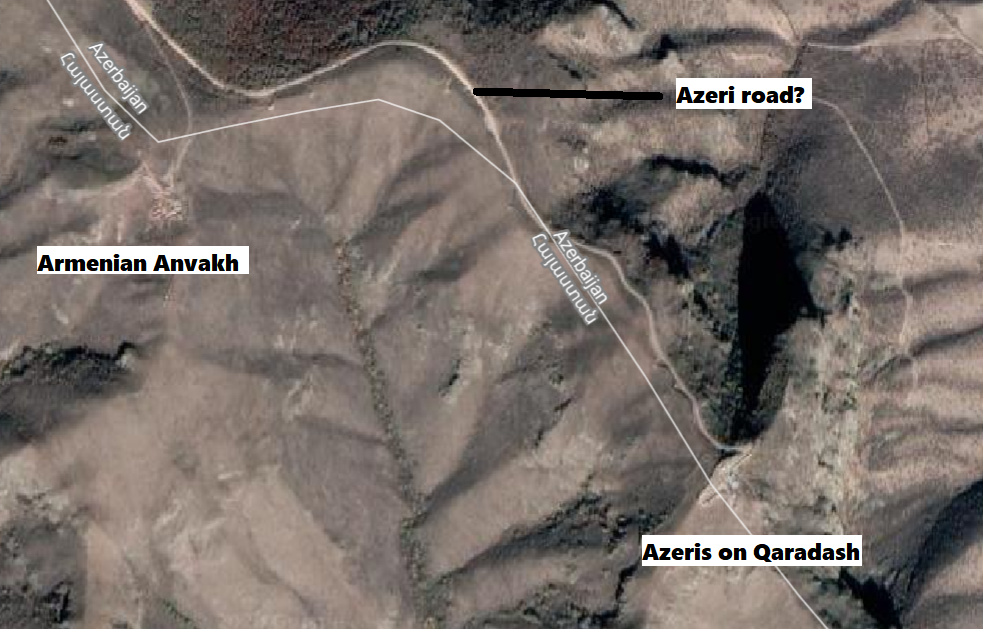 And here is another image by NKObserver showing the new and old positions on Google Maps: 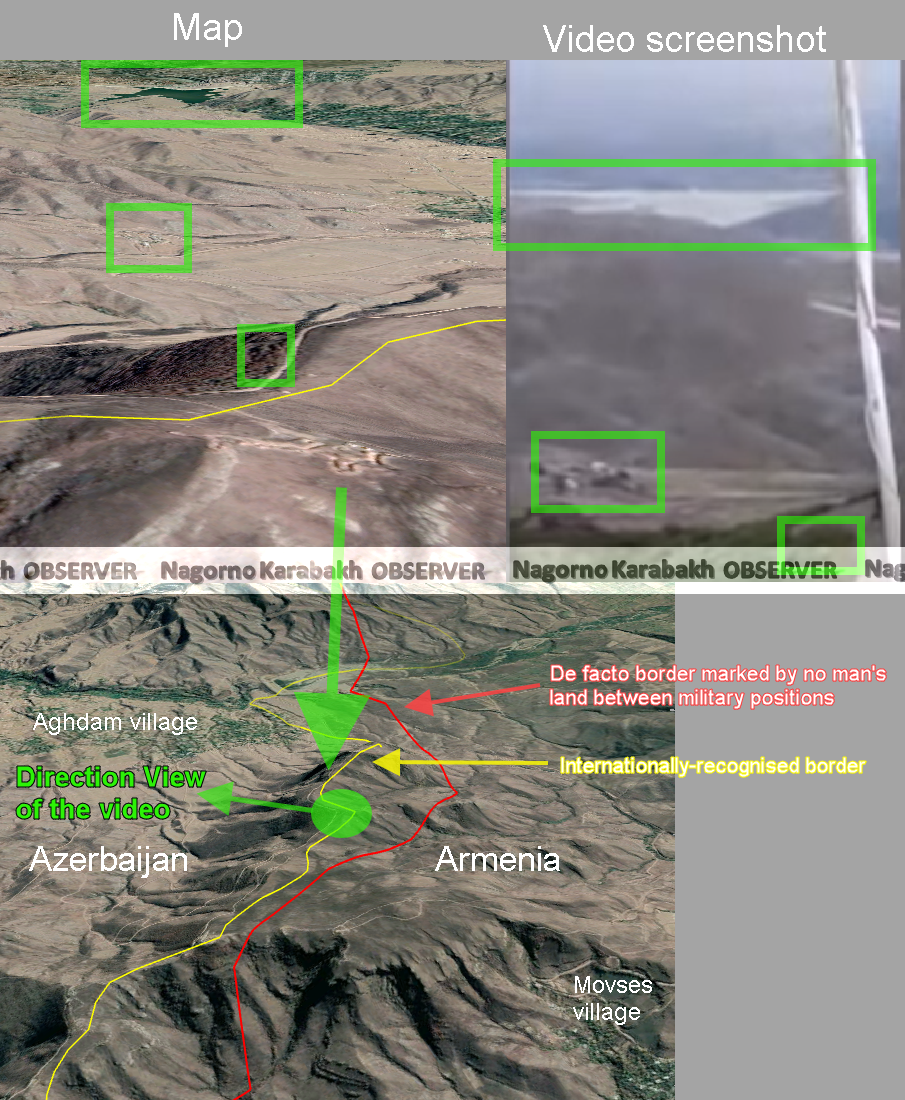 Arthur Muradyan was wounded during July's Tavush Battles. He passed away. The govt will provide $120K aid to his family.

"Armenian air defense vs Azeri drones" is the title of the latest Tavush Battles coverage by WarGonzo channel. "The conflict was notable for a high number of downed drones: 12 in Tavush and 2 elsewhere."

Not all of the displayed drones were downed during Tavush Battles, as stated by Armenian MoD. The ones placed forward were the new ones.

Army: Azeris were one of the first countries that used suicide drones in combat in 2016. This year they also used them. A civilian was wounded from a SkyStriker

Russian Journalist: there is info that a Turkish plane that traveled to Azerbaijan bright with it 6 Bayraktar drones. Those can carry 4 missiles and return for refueling.

Today they held a joint anti-drone exercise with Russia

Tavush's civilian infrastructure suffered $311K in damages from Azeri attacks. Today the govt gave $52K in emergency funds to begin the repairs until the main aid package is approved.

Pashinyan during govt session: our position on Artsakh settlement was reaffirmed after these battles:

2) Artsakh must be part of negotiations with Azeris.

3) Azeris must publicly reject violence and end the Armenophobia campaign.

4) Negotiations must be meaningful. Azeri stance that the negotiations are part of the war is defeating the purpose of negotiations.

5) Countries that supply weapons to Azeris must understand that when they use it against civilians, it's an international crime. It appears as if it's not Azeris that are attacking our civilians but the corporations that supply the weapons.

6) We need a stronger border-monitoring mechanism by the international community to identify which side violates the ceasefire.

7) We'll continue to cooperate with OSCE and criticize Turkey's actions that destabilize the region.

Armenia reviews the situation within Azerbaijan

Pashinyan: they attacked, we repelled. They have many human and tech losses. The biggest losses are in their morale. The internal situation was destabilized in Azerbaijan.

This has forced Aliyev to attempt more provocations to redirect the public's anger towards Armenia and Artsakh.

They attacked our lands, within our territory. Aliyev's claims about our aggression are nonsense because the action took place on lands that belong to us.

They attacked us while we were engaged in peace talks. They refuse to negotiate with Artsakh. Their attacks resulted in us strengthening our positions.

The myth that Azeris can defeat Armenia, hence Armenia must go for concessions, has gone into the ether.

Not only did the Armenian army display a high performance, but they reaffirmed the fact that we have the region's smartest and most combat-ready army. We draw this conclusion from the post-July 12th events.

Thanks to diaspora Armenians and local Armenians for showing unity and trust towards the army and govt. You have shown that we are one family.

Pashinyan: Armenia showed a responsible and confident attitude in front of the international community. We respected the 3 agreements for the ceasefire, which were all violated by Azeris.

We didn't threaten their civilian objects and the population, while they threatened to bomb our Metsamor nuclear plant, which indicates that Azerbaijan is a terrorist state.

The OSCE's rapporteurs, more notably and effectively from Russia, called for peace since day one. The only country that was trying to incite more violence was Turkey.

That's not surprising considering Turkey's anti-Armenian attitude and continuous justification of Genocide. We must do more in the international arena to combat Turkey's aggression.

The House committee rejected Azeri lobbyist Steve Cohen's bill which would block attempts to give humanitarian aid to remove landmined in Artsakh.

Another Azeri lobbyist Henry Cuellar recalled his own bill. The 3rd pro-Azerbaijan resolution was passed earlier.

One pro-Armenian resolution was approved to closely monitor aid to autocratic states like Azerbaijan with a record of human rights violations.

The House will vote on Jackie Speier's (supported by 30 Reps.) resolution to give HALO Trust $1.4M to remove landmines in Artsakh. It cleared the House committee.

Rep. Jim Costa: Azerbaijan must be held accountable for the aggression and firing at civilians, schools, and factories producing anti-COVID PPE. We should review the U.S. aid to Azerbaijan.

Russian-Azeri businessman in Araz Aghalarov removed Armenian products from his "Krokus" food stores and replaced them with Azeri food. https://news.am/arm/news/593119.html

Not everyone likes Azerbaijan's new Foreign Minister Bayramov. He was an economist before becoming the Education Minister in 2018. His new team is also consisted of similarly inexperienced diplomats, say the Azeri critics.

Inspectors say that safety violations by businesses have reduced significantly.

hmmmm 🤔. What if Billy was trying to create a Linux virus to sabotage his business rivals but accidentally created COVID? 🤔🤔🤔

COVID vs economy and investments

Economy Ministry and PwC did a research. Businesses are reopening, but managers and workers are skeptical about revenues and investments.

80% said they expect a revenue drop. 75% will delay or cancel capital investments. 38% will do layoffs in addition to expenditure cuts. 70% believe they can make the workplace safe, but only 20% can ensure a social distancing is respected.

BHK party is in trouble. Its leadership is charged with buying elections in 2017, and financial crimes.

BHK MP Sergey Bagratyan quit the party today. His fellow high-profile MPs denied any internal conflict and said that they learned about the resignation from the news.

3 new CC judges will be elected soon. The govt's candidate is Vahram Avetisyan. He worked in prosecutors' office in 1999, graduated a uni in Russia, has been teaching law in Armenia since 2002, etc.

Parliament must hold a secret ballot vote to approve or reject.

Yesterday a report stated that the European Court for Human Rights approved ex-IRS chief Gagik's petition to allow him to travel abroad for spine surgery. (he's arrested with finance charges)

Armenia's representative in ECHR denied that report, saying Khachatryan can pick his own hospital and doctors, but within Armenia. He must be given physical therapy, too.

117 low-income or disabled people were living in govt-subsidized apartments for decades. They are one part of this wider group. Today the govt decided to donate the apartments to them.

More lands are being irrigated and registered

In 2019 the govt began using satellites to identify the farms that are visibly in good shape which indicates irrigation. They then compared the data to the database of farms that are paying for water, to find those who steal water.

The number of registered water users increased this year. 114K people have water contracts. The recorded irrigated lands went from 75K hectares to 80K, with part of it being a result of the shadowy economy reduction.

The govt approved a bill to require public transport vehicles to be examined 4 years after their manufacturing date.

4-10-year-old transport will be examined once a year, while older ones twice a year.

4-10-year-old private cars, motorcycles, cargo vehicles will be examined once every 2 years, while the older ones once a year.

The violators will pay a $40 penalty.

The law will also establish a stricter licensing system for companies that install liquid gas canisters inside gas-powered vehicles.

6,400km irrigation network was repaired across Armenia ahead of this year's irrigation season. 1,000 water pumps, stations, and wells were renovated. https://factor.am/271222.html

Gegharquniq's Artsvanist has a new water network. Every farm has access to running water now.

Two kindergartens are renovated in Yeghegnadzor for the first time since 1970. They'll have solar water heaters.

One seismic-proof, disability-friendly, anti-fire school is being built for 432 kids. It can withstand a 6.9M earthquake.

"Tree". It's the original version of the song.