The court has found BHK MP and BHK Dodi Gago's bodyguard Eduard Babayan guilty of assaulting and sending a man to a hospital last year. He is sentenced to 3.5 years in prison, but the late-2018 mass amnesty applies to him as well due to the timing of his crime, which is why he will not spend time in prison.

We learned last year that the bodyguard beat up a man who annoyed Gago with a plea to help his son to get out of army. Gago refused to help.

The court has found that in one of the statements made by NSS on February 19th about Rob Kocharyan's son Sedrak, the text of the NSS message violated Sedrak's presumption of innocence. The NSS didn't communicate clearly that he was innocent until proven guilty.

Kocharyan family is facing money laundering and tax avoidance charges. NSS chief and NSS website have made multiple statements about this in past. During one of the interviews, NSS chief incorrectly described the money laundering charges as "bribery charges", which he later publicly corrected on several occasions. Nonetheless, Kocharyan decided to sue NSS chief Vanetsyan for a "defamation" because of the incorrect terminology. There appear to be two such lawsuits against NSS.

Ararat police department has detained an employee of a penitentiary for smuggling cell phones for inmates in exchange for a 50k bribe. It ain't much, but... 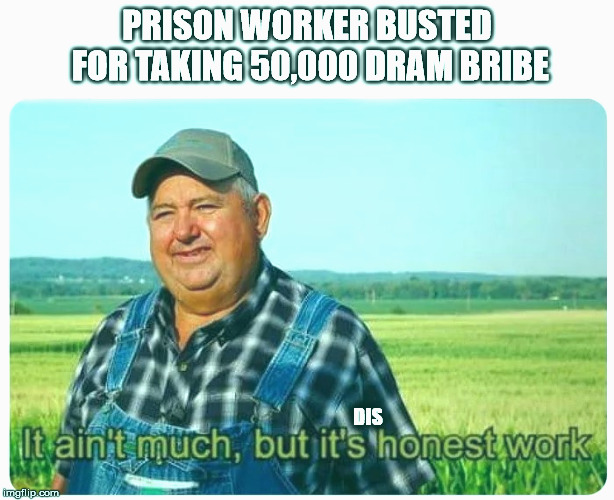 The investigators solved 33% more illegal tree cutting cases on 2018 than on 2017. Dozens, if not hundreds, of government officials tasked with protecting the nature have so far been charged with abusing their powers and aiding tree cutting.

National Gallery of Armenia clarifies that the hundreds of missing items from the museum aren't popular items from the National Gallery itself, but lesser known ones, which were part of another museum that was dissolved and merged with the National gallery. The investigators released a statement yesterday saying the examination showed that 649 items were missing from the museum's inventory. The now-merged museum wasn't properly recording their inventory, say investigators. The now-merged museum's director says those items haven't been in the collection for a long time.

Former Transport Minister Gagik Beglaryan has been questioned as a witness in the 23.5bln embezzlement case in North-South highway project, which the investigators busted last year.

Basically he should resign for....

1) For implementing the cancer and STD preventing vaccines to prevent female deaths 2) For having plans to implement a code of ethics for teachers so they won't beat kids and come to work in dirty clothes. 3) For destroying the culture by giving the museums and theaters hundreds of thousands of new visitors through subsidies. 4) For attacking the church by never speaking against the church leader, and preserving good relations. 5) For attacking the economy by improving economic numbers, salaries and pensions. 6) For attacking free speech by criticizing fake news and libel against him and his family. 7) For creating an atmosphere of hate by instructing his supporters to never attack opposition members, and for going after violence inciters. 8) For destroying the foreign relations by eliminating Diaspora Ministry to raise its status by moving it directly into Prime Minister's cabinet, and by securing the first in a long while net-positive immigration from diaspora. 9) For being "buddies" with Ilham Aliyev by calling him corrupt and a coward for not sending his son to serve in front lines.

"Nikol Pashinyan is taking the country to a collapse", said the activist who earlier took a sewage water and attempted to assault mayor Taron Margaryan with it during a municipality session few years ago.

Yerkir Tsirani is the political party which attempted to hijack the 2018 revolution but got booted out. They have proposed policies which would ironically destroy the foreign relations between Armenia and its allies, kick the Russian military out of the country, incite a war with Azerbaijan by ending the negotiations and abruptly recognizing Artsakh's legal independence, spread conspiracy theories about Pashinyan and Serj Sargsyan being secret allies.

President Sarkissian participated in a world economic forum in Jordan, during which he spoke about the Armenian energy sector, and the importance of nuclear energy for the nature protection. Despite the fact that Armenia is in Middle East and doesn't have oil, it has huge amounts of water, but unfortunately we can only utilize 15% of it, said the president.

He met the king Abdallah II of Jordan, whom he invited to visit Armenia. Not clear if the offer was accepted, but the king will send a group of investors to Armenia soon to discuss various projects.

Sarkissian then met the UN chief, who used to be a board member of Galust Kiulpenkian (Gyulbenkyan) Foundation.

Later, he met the CEO of UAE Majid Al Futtaim Holding, which owns the Carrefour mall in Yerevan. They discussed the possibility to expand the business in Armenia, have Armenia as a partner in the region for various projects, use the firm's international mall network to export and sell products made in Armenia.

Gevorg Petrosyan vows to legislatively fight against gay propaganda conducted by "sects and sexually disturbed people". This comes a day after a tranny took the Parliament floor during BHK Naira Zohrabyan's session, who probably became jealous of the guest's dress. The trans activist spoke about the crimes against gaes.

Zohrabyan got upset and kicked the activists out of the Parliament, so the activists sent a complaint to Council of Europe's anti-discrimination committee.

Two men were seen holding a sign on front of the Parliament building gates saying "Hang tight, the people are coming". The message was towards the LGBT activists.

November: Popular Russian blogger Varlamov was blocked at Baku airport and deported, presumably for criticizing the city's architecture, street safety and slums in his prior blog.