Anti-Corruption Oct/2/2018: 🔥🔥 ANTI-REVOLUTION DEVELOPING!! 🔥🔥 HHK, BHK and ARF hold an unexpected session and vote in favor of a bill preventing the only practical guarantee to dismiss the Parliament and hold snap elections. PM Pashinyan is on the streets. (UPDATED)
by ar_david_hh

Criminal case is launched against state property management department employees for abuse of power and falsification, for selling AMD 244mln worth water infrastructure to a private company for only AMD 22mln http://www.armtimes.com/hy/article/145417

PM Pashinyan has revoked the diplomatic status of Serj Sargsyan’s brother Levon Sargsyan, who is currently wanted by the police for illegal enrichment. Earlier, Yerevan State University has revoked his status in the board of directors of a department http://www.armtimes.com/hy/article/145448

Men’s chess team defeats Belarus in Chess Olympiad. The next opponent is Poland, one of the leaders of the tournament http://www.armtimes.com/hy/article/145398

Edit: Not sure why the previous edit didn't work, but the men's chess team actually played a tie with Poland.

... women’s team is currently the lone leader of the tournament https://armenpress.am/arm/news/949332.html

All the accused are innocent until proven guilty yada yada now the important part...

BHK’s Gevorg Petrosyan has proposed (and received a verbal support from HHK) an amendment to the law which Pashinyan and QP allies label as a sabotage attempt. If passed, the amendment will prevent the Parliament’s dismissal if the deputies fail to show up during a vote to elect a new PM in the event of PM’s resignation. Currently, if the PM resigns, the Parliament has 14 days and two sessions to elect a new PM. It has been suggested that Pashinyan could voluntarily resign and HHK/BHK voluntarily fail to elect a new PM, in order to trigger new elections. The new bill could indefinitely delay the new PM vote while keeping the Parliament under HHK's control https://armenpress.am/arm/news/949345.html

... Pashinyan labels it as an attempt by 3 political parties to organize an anti-revolution and take the country back to corruption times. Says the elections must be held this December. If the bill is passed, it would make it harder to hold snap elections. Pashinyan could voluntarily resign but the HHK and its allies could decide not to dismiss the Parliament. https://armenpress.am/arm/news/949419.html

... ARF and HHK leadership officially says that they will not agree to December elections under any circumstances. http://hetq.am/arm/news/93582/dashnakcutyuny-oreve-kerp-chi-hamadzayni-dektemberin-yntrutyunner-anckacnel.html

... Pashinyan says HHK, BHK and ARF have declared a political war against the public https://armenpress.am/arm/news/949435.html

... Pashinyan calls for a protest on front of the parliament building after HHK assembles a blitz session to vote on the bill http://www.armtimes.com/hy/article/145464

... the blitz session is being hold behind the closed doors with the microphones off. QP/Yelq is furious. http://www.armtimes.com/hy/article/145472

... HHK, BHK and ARF vote in favor of the bill. The bill is passed.

... QP ally Yelq's Edmon Maruqyan says this blitz voting has violated the protocols. The microphones weren't turned on, the voting process wasn't live-streamed as in all other sessions.

... PM Pashinyan joins the protesters outside of the Parliament building. http://hetq.am/arm/news/93593/khorhrdarann-yndunec-nakhagitsy-tarmacvox.html ---- https://armenpress.am/arm/news/949443.html

The protesters have closed the Parliament exits. The MPs can't get out http://www.armtimes.com/hy/article/145475

20:50: Thousands of protesters have already gathered an hour after Pashinyan made a live-stream calling for protests. The crowd is chanting "duxov" and "Nikol".

20:57 - Pashinyan with a megaphone on front of Parliament building. Says the HHK and their allied parties should be "dismantled" as a party. "HHK heracir", "HHK heracir".

21:00 - the Ministers are also present. They are doing the Viking clap. The crowd is chanting "artahert" (snap elections).

Deputy PM Tigran Avinyan is surprised that BHK and ARF joined the HHK in this "desperate vote" https://armenpress.am/arm/news/949450.html

Pashinyan urges the crowd not to touch the MPs who exit the building. "Just smile to them and chant HHK Heracir".

... says there are 20,000 people right now in the area and moving towards the area. Two hours after the live-stream.

ARF currently has 2 ministers and several provincial gubernatorial, after striking a deal with Pashinyan post-revolution.

The crowd chants "shame" to BHK and Tsarukyan alliance.

A minute of silence in the memory of Charles Aznavour

21:50 - Pashinyan officially signs the papers firing ARF and BHK employees from his cabinet. However, Deputy PM Mher Grogoryan has asked to stay and work with the PM, and has received a positive response from Pashinyan. 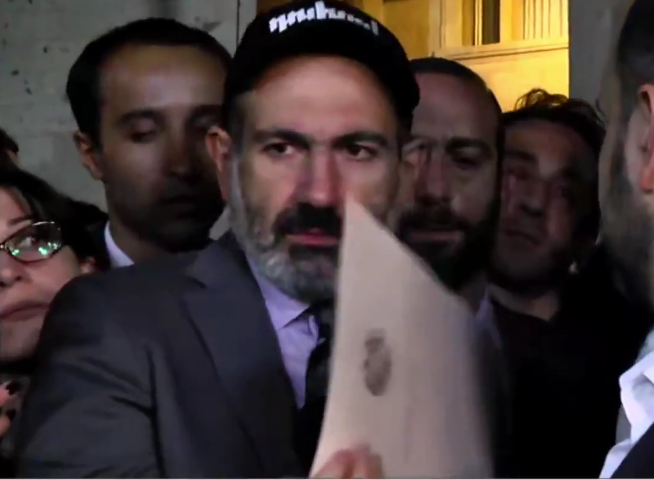 21:54 - Pashinyan says the president has 21 days to sign the bill or send it to the Constitutional Court. He calls for president Armen Sarkissian not to sign the bill and to sent it to the court, thus delaying its passage. After which, he says he will resign as Prime Minister. The Parliament will have 7 days to elect a new PM. If they fail to do so, they'll have another 7 days. If they do not elect one, there will be snap elections.

(he is essentially trying to repeat the April event in which he plans to gather the public and pressure HHK/BHK not to elect a new PM, but he is doing this without any prior guarantees)

22:01 - Pashinyan will enter Parliament and negotiation now. Calls for the public to remain peaceful.

Analysis: Here is Pashinyan's plan. Before the bill becomes law (at least 21 days if president delays the signing), Pashinyan will resign (possibly very very soon). Parliament will be given 14 days to vote for a new PM. If they fail, snap elections will take place. If HHK/BHK decide to hit him in the back by electing their on candidate as PM, Pashinyan will repeat the April revolution.

22:13 - Pashinyan and the crowd enter the Parliament area. He calls for the crowd to wait outside, but some from the crowd attempt to enter the building. The crowd has moved from the outter gates to the actual building doors now.

22:46 - if Pashinyan's plan works out, the snap elections could be even sooner than December.

23:04 - Pashinyan is currently in Parliament speaker Ara Babloyan's office, having a meeting with other party members. Vanadzor has joined the protests.

22:xx - ARF's leader says it's unfair to call ARF counter-revolutionary. Says the bill doesn't prevent the discussion of snap elections. They are still in favor of it. https://www.youtube.com/watch?v=vS9PEtfacxg

23:30 - it appears that BHK is not participating in the negotiations. Pashinyan is still in HHK Babloyan's office.

00:05 - The negotiations are wrapping up. Pashinyan is expected to exit the building soon.

01:01- The negotiations are over. Pashinyan is out to deliver a speech. Has to walk though the thick crowd to reach the stage. The crowd is chanting "HHK GTFO".

1:05 - Says all parties were present during the negotiations. He proposed his resignation if other parties sign a written pledge not to vote for anyone, triggering snap elections on December. The 3 parties have acknowledged the situation, but only gave a verbal promise not to vote for anyone after his resignation. They've discussed the reasons for the snap elections. Pashinyan insisted that the current Parliament doesn't represent the people's will. He gave examples why the elections can't be on May, 2019: There is a political crisis in the country, the situation makes the field more uncertain for investors and for the public. Says it can't be sooner than December.

1:28 - Says he has spoken with president Sarkissian (about delaying the bill), who said he won't do anything against the public. More on that when he returns to Armenia from NYC.

1:30 - says he will resign regardless whether there will be a written pledge by parties or not. After resigning, he will continue as the acting PM until a new one is elected. During that time, he will replace today's fired governors and ministers.

1:33 - Says he is happy with today's results. Asks people again not to use slurs against politicians. Thanks the NSS employees for providing today's security, the army (long claps). The crowd is paying tribute to Aznavor with claps. Viking clap time (modified Armenian style dhol). The speech is over. They'll walk few minutes on the streets before going home.

Thank you for tuning in. That is all for now.