Former police chief Vladimir Gasparyan is under an investigation around a deal where he bought a $3mln house for $200k. No details yet. This is the man whose policeman brother was yesterday charged with death threats against the Vardavar man. https://news.am/arm/news/467604.html

IRS has fired the head of Bagratashen customs point after receiving numerous complaints. The official was accused of having a habit of beating and cursing at local residents. The new chief is a well respected staff member https://armlur.am/833576/

Military police launches a criminal case against yet to-be-determined military officials, for stealing a fuel that was meant to be used by the food preparers https://armenpress.am/arm/news/944848/

The car servicing companies which falsified documents to avoid taxes, have so far re-paid AMD 186mln back https://armenpress.am/arm/news/944847/

Residents of Maralik are demanding HHK mayor’s resignation. He is accused of improper management and using his position to benefit his family members. The mayor denies the claims and refuses to resign. Blames the accusers of corruption. https://armenpress.am/arm/news/944851/

Pashinyan and IRS chief says the taxes should be lowered and the tax code simplified. IRS chief says this will put more money in people's pockets and increase circulation. Says for the first time they're doing serious steps to get a true picture of the shadow economy. The deputy IRS chief said the corporate taxes could be 20%. VAT will remain the same. The debates around this will finish on September, and they'll take it to Parliament for a vote. www.civilnet.am/news/2018/08/23/Կառավարությունը-հայտարարում-է-եկամտահարկի-նվազեցման-մասին/343589

Armenia International Airports Co will invest AMD 1.5bln to repair the Gyumri airport tarmac which will meet international standards and allow new foreign airlines to do business there https://armenpress.am/arm/news/944836/

Part of the new anti-hail systems that are going to be deployed across the country will be produced in Armenia, by the Yerevan Telecommunications Research Institute. The prototype is created and will be tested soon. One radar will scan the clouds in the radius of dozens of thousands of KMs, calculate their direction and strength, then send a signal to the nearest anti-hail missile, once the cloud enters RA territory https://news.am/arm/news/467668.html

... as always, Pashinyan has his selfie stick on him like a little travel-slut 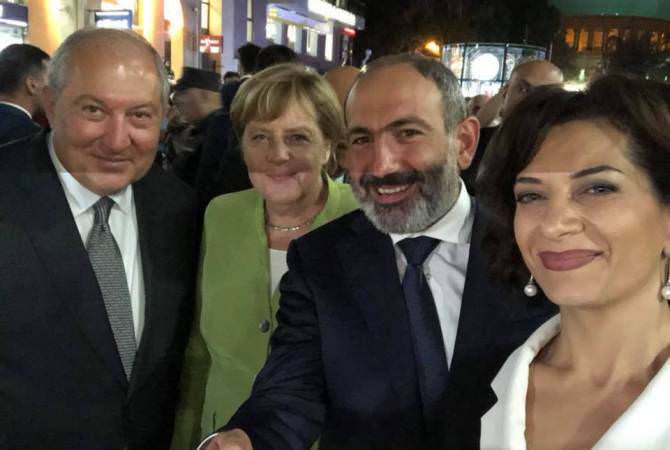 Angela Merkel says Azeri gas isn't a true alternative to the Russian gas because of its price. Says Germany will support the additional gas supplies from Russia. Azerbaijan considers itself as an alternative to Russian gas, but its expensive supplies are only planned to deliver 16bcm/year and are limited to few countries, compared to Russia's 240bcm across EU. Last year, US president Donald Trump negotiated a deal with several EU countries to supply them with American liquid gas (LNG), thus injecting US into EU's fuel competition. Trump is currently pressuring Germany and other EU nations to buy more US LNG, which is more expensive. Currently, it only delivers 0.5bcm/year across the ocean. This is directly related to the so called "trade war", and Trump's fight against EU tariffs against American products. http://www.armtimes.com/hy/article/142929 ----- other sources.

Edgar Stepanyan becomes the European champion of U23 cycling for the second time http://www.armtimes.com/hy/article/142982