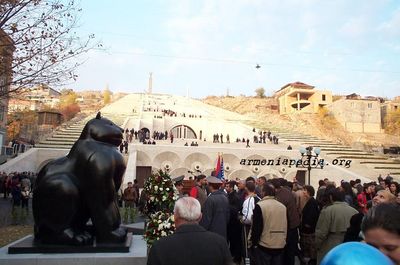 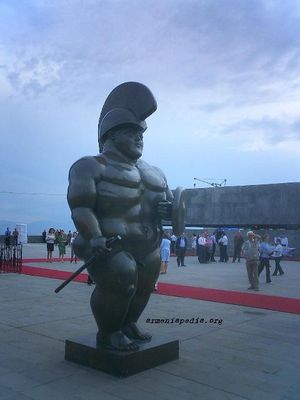 Fernando Botero (born 1932) is a Colombian artist who by his own admission is "the most Colombian of Colombian artists." His paintings and sculptures are, on first examination, noted for their exaggerated proportions and the corpulence of the human figures and animal figures. The "fat people" are often thought by critics to satirize the subjects and situations that Botero chooses to paint. Botero explains his use of obese figures and forms as such: "An artist is attracted to certain kinds of form without knowing why. You adopt a position intuitively; only later do you attempt to rationalize or even justify it."

The "Roman Warrior", a sculpture by Fernando Botero. The 1986 bronze sculpture with a brown patina stands proudly over 12 feet tall and is the second Botero piece to adorn Yerevan. The well known Columbian artist also created the Cat, which sits at the base of the Gerard L. Cafesjian Center for the Arts at the Cascades.