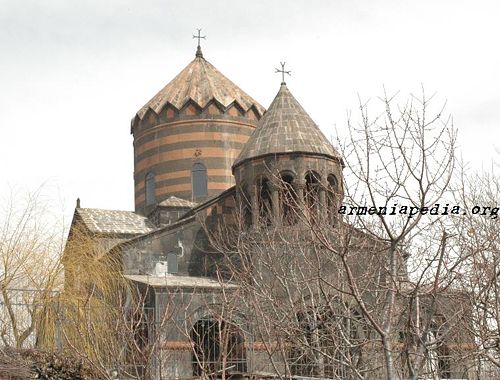 Crossing the main highway bridge, [heading north from Ashtarak City] the first exit right leads to the village of Mughni, now inside the Ashtarak city limits, with the 14th c. Monastery of S. Gevorg. The church, with its distinctive striped drum below the conical cupola, was rebuilt in 1661-69 by order of the vardapet Yovhannes, and is in 1999 undergoing major restoration.

In the 17th century life in Eastern Armenia. then under Iran’s domination, became relatively stabilized with the immediate result that the economy of the country, where important trade routes lay, revived. Settlements were restored, civil and religious buildings were erected. New monastery complexes were small, as a rule. As distinct from their predecessors they had one church with a chapel and a belfry, residential and service premises situated along the fortress wall which enclosed the bailey. Such were Tatevi Mets Anapat, Khor Virap, Shatinvank, etc., and such is the monastery in the village of Mughni, Ashtarak district.

Standing on an elevation, it is the architectural dominant of a vast settlement and of the territory adjacent to it. Its only church, St. Gevorg, is in the center of a wall-enclosed rectangle the north-eastern corner of which is occupied by celIs and service structures. The first storey of the northern wing housed storerooms. and the second one—monks’ cells.

The Eastern wing was much smarter in appearance. At the top, there were the Father Superior’s chambers to which an external one-flight stairway led. Below, there was a refectory with a kitchen and a pantry. For the worshipper’s convenience, it had an exit to a small square beyond the eastern wall of the monastery. Pilgrims' carts were usually parked there.

St. Gevorg church was built in 1661--1669 by the architects Sahak Khizanetsi and his successor Murat. It is of a cross-winged domed basilica type. This capital structure of a considerable size is among the best works of architecture of those times. Although it reproduces the composition of earlier structures of this kind, the temple has individual features all its own: its middle nave is quite broad, its dome is placed not on the transversal axis of the building but away from the altar apse, over the center of the prayer hall. The basilica form clearly prevails over the cross-winged dome-type layout, which is especially evident in the exterior of the structure distinguished by clear-cut shapes.

Architectural details emphasize the artistic expressiveness of the building. The round drum of the cupola is crowned with an umbrella-type tent. Over the cupola windows, shifted away from the central axes, there are high-relief carvings of the Evangelists. Large facade windows are framed in fillets forming rectangular platbands with circles or scrolls at the sides and a large cross above and drooping like a ribbon which, in the thirteenth-century monuments, reached as far down as the plinth wall. The mixed masonry is of orange and black tufa bricks which alternate in rows on the drum and in checkerboard fashion on the facade gables.

The fine carved decoration of the southern portal is most interesting. It is composed of alternating strips and small quatrefoils. Special attention was given to the tympanum of the western portal which is decorated with an ornament of luxuriant foliage and vases typical of West European baroque. It can be accounted for by Armenia’s trade ties with Western Europe. In the interior of the church there have survived fragments of murals dating back to the seventeenth century, which were probably created by Nagash Ovnatan, the decorator of Echmiadzin cathedral and of a number of churches near Yerevan and Akulis.

The open three-arch gallery was built simultaneously with the church: this is a rare phenomenon in the history of Armenian architecture. The gallery is crowned with a 12-column rotund belfry. Its central span is somewhat broader and higher than the side ones. This adds much to the architectural expressiveness of the gallery which, in its turn, livened up the exterior of St. Gevorg church and gave it a more monumental appearance.

Text and floorplan from "Architectural Ensembles of Armenia"
O. Khalpakhchian, published in Moscow by Iskusstvo Publishers in 1980.